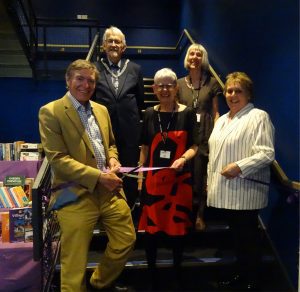 We were thrilled to celebrate LAR Returns Week this April in a week of special events celebrating the Assembly Rooms as a hub for the local talent of Ludlow.

Things kicked off on Saturday April 16 at 16:00 when local MP Philip Dunne, Mayor Robin Pote, and Lezley Picton of Shropshire Council attended a ribbon to mark the start of the celebratory events. Then, in the evening, the talented youngsters of Ludwig Theatre Arts wowed audiences performing ‘Songs from the Shows’ – a musical extravaganza of song and dance.

Tuesday 19 was Poetry Night, when local author Gareth Owen spoke about his life in writing. Gareth is a prize-winning poet and was for many years the popular presenter of BBC’s ‘Poetry Please!’. Live musical accompaniment was provided by Martin and Kim Olyett.

On Friday it was time for some classic café theatre with Two Score Theatre Company, who performed two one act plays in Oscars, with supper from Bill’s Kitchen Ludlow included in the ticket price. The café theatre setting will provided an intimate vibe for this live theatre, and the mood was set by local musician Oscar Teo, who will be performed live during the interval.

Saturday night was party night when LAR lets its hair down with two fabulous live bands, who took over Oscars for a night fun, dancing and toe-tapping music! Little Rumba and Blue Moon blew audiences away with their unforgettable rhythms.