The History of the Ludlow Assembly Rooms.

Live theatre, music and cinema in the heart of Shropshire – The Ludlow Assembly Rooms is an accessible arts and community centre like no other. Find out how it all began, from a humble 18th century pub, to a newly refurbished centre for the arts.

The Assembly Rooms became popular in the 18th century as places where people could meet for social gatherings, balls and concerts. In the mid-1830s it was proposed that Ludlow have a new Assembly Rooms. More than £6,000 was raised by public subscription and the fine buildings of today were erected during the following two years. An imposing Italianate style was used, with occasional Egyptian features, as in the doorway into the room now known as Oscars. The buildings included a museum for the Ludlow Natural History Society and the whole complex was to be known as The Public Rooms..

The Public Rooms were opened on 2 July 1840 with Ludlow Races Ball, a highlight of the social season. There were many concerts and the displays in the museum attracted scholarly attention.

Later in the century, events at the Rooms lost some of their prestige, and parts of the building were used as shops. In the early 20th century the ballroom became a cinema. Many locals retain affectionate memories of ‘The Picture House’, (alternatively called the flea pit’. In the early 1980s it became a night club, nick-named ‘sticky carpet’ because of the beer-soaked floor. The museum too became out-dated and was disbanded in the 1950s, though later revived and revitalised elsewhere. 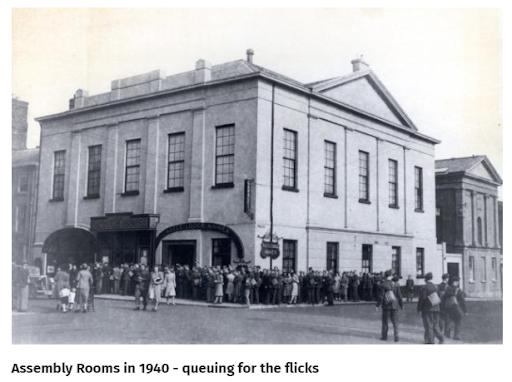 The leisure amenities in Ludlow suffered two catastrophes in the mid-1980s. In 1986 the Town Hall, a focus for local entertainment, was demolished, depriving the town of its covered market, spacious assembly room and elegant Council chamber. In 1987 the Clifton cinema was demolished, despite a vigorous campaign by local people.

Ludlow, now with the majority of it’s civic, community and leisure facilities gone, looked for ways to replace those amenities. The project of reviving and enhancing the Assembly Rooms was a response to this situation. Nine years of community debate and effort turned the dream into a reality.

Ludlow and District Community Association was formed in 1988 and a short lease was taken on the first floor of the old Museum (now Oscars and The Studio). In 1989 the Town Council took a lease on those parts of the building occupied by the Starline Club. A joint Town Council and LDCA Development Committee was formed to drive the project forward.

The Assembly Rooms opened on Sunday 31 May 1993. At that time, the building consisted of the upper floors of the former Assembly Rooms and Museum Building, linked by a multi0storey infill block, foyers, toilets, a restaurant, and a hydraulic lift. The glass front of the infill provided enticing glimpses of what was happening inside.

A massive lottery grant (£1.2m) was awarded to the organisation in 1996. This was used to buy a piece of derelict land behind the premises on which the office and kitchen were built; the upper storey of the former museum building was converted into two floors, Oscars and the Studio. 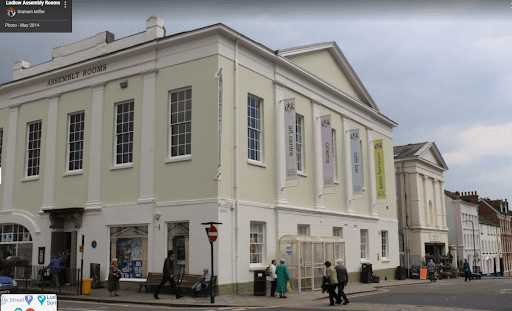 In 2008, Shropshire Council approached LDCA with the idea of turning the lease (which had 30 years to run) into a long, 125 year Community Asset Transfer lease. Whilst welcoming this idea, the LDCA Board were very clear that the building would need to be brought up to standard before they could accept this. This project would increase LDCA’s footfall by incorporating the Council run museum and Visitor Information Centre on the ground floor, together with the main staircase.

A Sustainable Future for the Assembly Rooms – The Refurbishment Project

It was agreed that Shropshire Council would manage the project. Architects and builders were appointed and the auditorium was shut in August 2018 for what was then anticipated to be six months. The state of the building, particularly the ground floor and the roof, were in a much worse state than had been anticipated and eventually the project was completed in May 2021 – three years late and way over budget. The latter part of the project also coincided with the Covid-19 pandemic which both brought building work to a halt for several weeks and caused delays in procurement of building supplies.

If you’d like to visit the newly refurbished Assembly Rooms, click here to browse our current events!